The Most Incredibe Experience 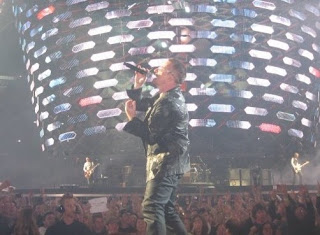 It has been so long! Wow. Not even sure if anyone is reading anymore, considering my terrible rate of updates! I have missed writing though, and so I’m happy to take the opportunity.

Much to catch up on for sure, but I’ll just hit the highlights. I’ve felt really busy these days with work and my internship. Doing forty hours a week, which isn’t so bad, but after doing zero hours a week for the entire summer, it takes some adjusting. Mostly I just get tired at the end of the day. It definitely feels weird not being in school too. I miss it for sure. Still though, I have no complaints. Life is truly amazing…

Which brings me to the most recent of my highlights and the lovely photo! Since I bought the tickets in the Spring, I had been looking forward to the U2 concert on September 20. All summer, I was so excited to know that on that date I would be healed and ready to enjoy their incredible show. Well, a few days have passed now and I’m still riding the high from the show. The experience began at 2:30pm, when I arrived at Gillette for the 7pm show to wait in line. This was the first show I bought GA (standing) tickets for, so I could try and get the opportunity to be really close to the band. I prepared as best I could and set out on the adventure with Bethany (my girlfriend), Cassandra (my sister), and my friend Salim. After a few hours of waiting, the gates opened and we were released onto the field. And to my delight, we got just about the greatest spot in the entire place! Right in front of the outer stage: 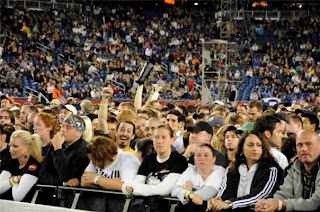 Picture taken by Richard McCaffrey for The Boston Phoenix

Salim is the guy looking at the camera with his fist in the air and I am (a bit harder to find) to the right of him. The first photo, of Bono, was actually taken from where we stood during the show! Just like every U2 show, it was out of this world. Equal parts fun and powerfully moving. I was lifted off the ground along with the tens of thousands of other fans. A night to remember.

After that night I thought it pretty much had to be downhill from there…instead, it was only the beginning. Earlier in the month I was emailed about an opportunity to volunteer for the ONE Campaign at the U2 show. I, of course, ecstatically signed up for the next night at Gillette. Two nights in a row of U2 – does life get any better? Yes!

I volunteered throughout the day, signing people up for the ONE Campaign. Only four years ago, I discovered the ONE Campaign to Make Poverty History, at a U2 concert. Now it came full circle and I had the opportunity to recruit. Very cool. AND I got to watch the show from inside the circle this time, even closer to the band. But I still haven’t reached the climax of my U2 experience. Because as ONE volunteers we got to PARTICIPATE IN THE U2 SHOW! Yes, I had to use caps to say that – it’s the only way, I’m sorry. I got to go on stage with the greatest band in the world and my hero. I’m still smiling. So allow me to elaborate on this experience (as if I haven’t gone on long enough already)!

The song Walk On is dedicated to Aung San Suu Kyi, who has been a political prisoner in Burma for almost twenty years. One of the world’s most oppressive governments has kept her under house arrest because she won a democratic election and they decided that couldn’t happen. She was awarded the Nobel Peace Prize and U2 is trying to give more attention to this amazing woman, in hopes that the international community will be able to set her free. During this song, the band asks that everyone wear a mask of Aung San Suu Kyi’s face, that was handed out.

Meanwhile, I am back stage with volunteers from ONE and other organizations preparing for our part. I’m standing, listening, in total shock – about to literally pee myself. Bono asks for the volunteers to come out (our cue), we walk out onto the outer circle of the stage, lining up, looking out into a sea of over 60,000 people, and we hold the masks over our faces. I can feel the music pulsating behind me. It is a truly poignant moment for the entire stadium full of people. I am proud to stand for Aung San Suu Kyi.

And this is why I so totally love U2. Their music is action. It’s a soundtrack to life; not one that simply plays along, but instead one that demands more of us. It was one of the most incredible moments in my life. Against the backdrop of my battle and victory with cancer, it is made all the sweeter. I feel so completely blessed and I am eternally grateful for all that I have.