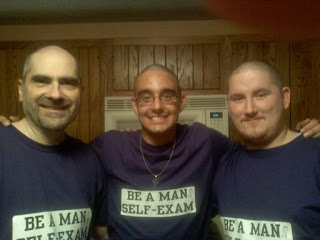 I was told that losing my hair due to the chemo would be inevitable, based on the type I'm receiving. I decided to strike first, and shaved it off last night. This battle will be on my terms.

I also had the support of warriors, Peter Pongratz and Patrick Spencer. Actually, they decided to shave their heads first, after which I reconsidered shaving mine. But they assured me it was too late to reconsider.

All joking aside, it was a really amazing gesture amongst us men and I feel so honored by their willingness to take that leap. And it was great not having to touch my hair this morning!
Sent from my Verizon Wireless BlackBerry